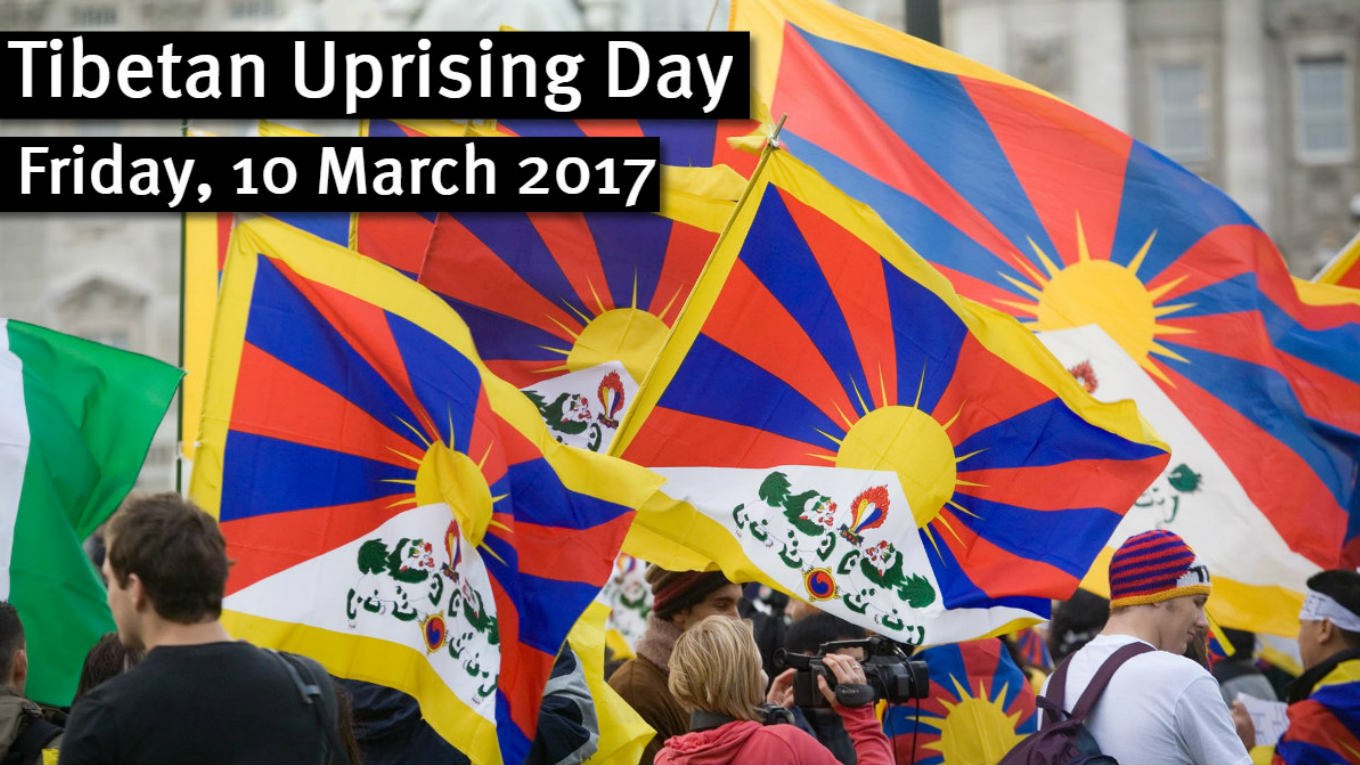 Thank you to everyone who came out to lend your voice, raise a sign, and otherwise raise awareness about Tibetan Uprising Day, March 10, 2017.    Please take the time you can to write a few postcards and/or send some emails in support of Tibet.   Three suggested actions are below. 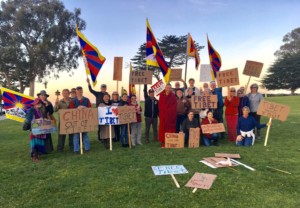 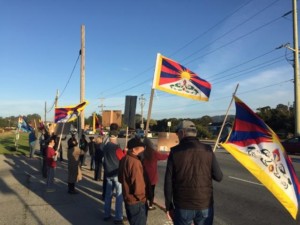 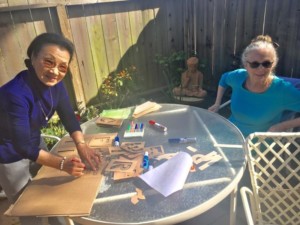 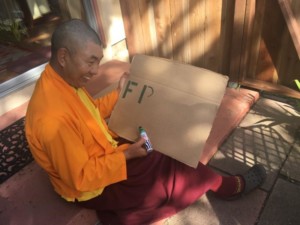 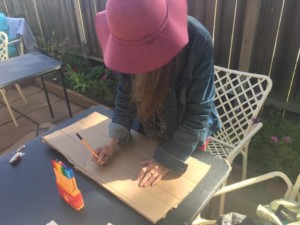 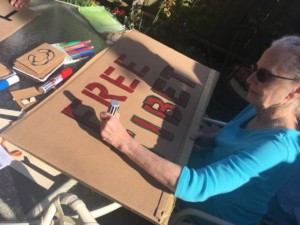 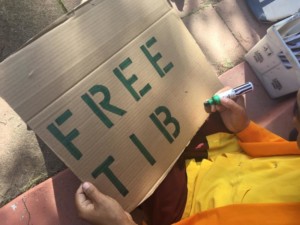 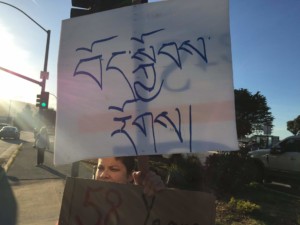 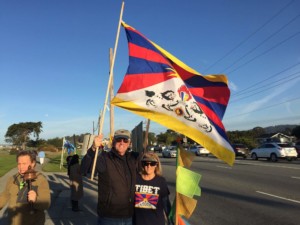 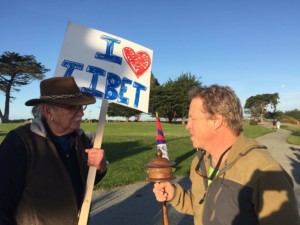 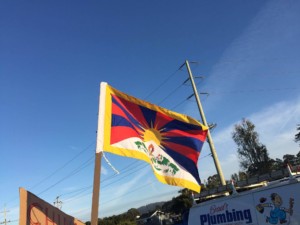 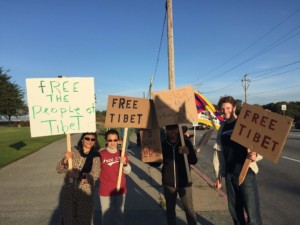 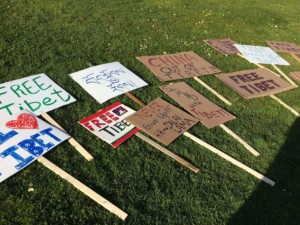 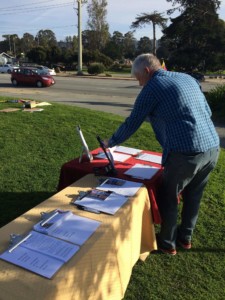 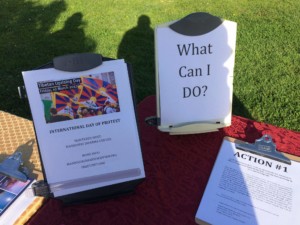 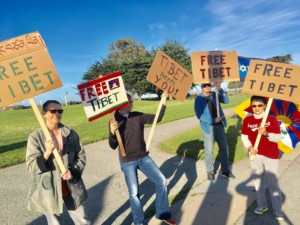 “Imagine you are not allowed to whistle ‘Yankee  Doodle’  as  you  work.  You  can’t  talk  about  the  day’s  events  in  your  native  language,  nor  wear  blue  jeans  and  tennis shoes, or any other garment quintessentially American. Your children go to a new school where  they  learn  a  language  other  than  yours, and are taught to report you to the authorities  if  you  speak  English  at  home.  Forget going to church.  This is Tibet today.” quote from 2016 article in Cedar St. Times.

Since the Chinese occupation in 1959, more than one million Tibetans have been killed.  To fly a Tibetan flag, send an email abroad, or say the phrase “human rights,” is cause for imprisonment and torture.   99% of all Tibetan monasteries have been closed.  The Tibetan people and their culture are being systematically attacked.  Our own teacher, 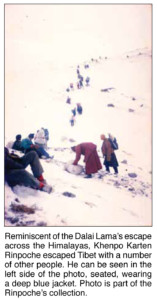 Khenpo Karten Rinpoche risked his life to become a monk in Tibet before fleeing in 1996.   He has suffered great personal tragedy, which he rarely speaks about.

Stand up against this repression and violence.  Lend your voice to peace, justice, and freedom:  Support Tibet!  Join us on Friday, March 10th, 4:30pm-6:00pm at Windows on the Bay as we join international protests in support of Tibetan freedom.  Signs will be provided. Please note:  Protesters cannot step into the street or hand out leaflets to cars, as per a city safety mandate.

Learn more about the issue:

In addition to joining us in protest, here are some things you can do to help the cause of peace, justice and freedom in Tibet.   We thank the Free Tibet website for suggesting these specific actions we can take.

Send a postcard and/or write an email to the U.S. Embassy in China in support of Tashi Wangchuk, a young man speaking up for Tibetan language:

Tashi Wangchuk is from Yushu in eastern Tibet. He became an advocate for the teaching of the Tibetan language after Tibetan classes were closed down in his local area, prompting concerns that future generations of Tibetans would grow up unable to speak their mother tongue.  His attempts to persuade the local government to provide Tibetan language information in schools were featured in an article and documentary in the New York Times in November 2015. Tashi Wangchuk pursued his campaign peacefully through official channels. He repeatedly maintained that his actions were not political.  Two months later he was arrested, and later charged with “inciting separatism”. It is likely he is being punished because he had the courage to work with the New York Times to highlight threats to Tibetan culture, despite the risk he would be arrested.

Send a postcard and/or write an email to Losang Jamcan, the Chairman of the Tibet Autonomous Region in support of Ngawang Gyaltsen, an imprisoned monk and thangka artist:

Ngawang Gyaltsen is from Tarchen Township, Nagchu County in the Tibet Autonomous Region. He is a well-known artist who was formerly a monk at Shag Rongpo monastery. He was arrested on 24 February 2015. His arrest and detention were executed in secret, leaving his family to believe that he had disappeared.  In March 2015, Ngawang Gyaltsen was found to be being secretly detained in at a detention centre in Nagchu, but his current whereabouts and conditions are unknown. No official reason for his arrest has been given.  Ngawang Gyaltsen had formerly studied thangka (Buddhist) painting at Shag Rongpo monastery, where he was a monk, but left the monastery to live as a layperson after being harassed and subjected to heavy surveillance by the Chinese government officials at the monastery. Ngawang Gyaltsen had had disagreements with the government officials over a re-education campaign for the monks and nuns. He continued to be harassed by the authorities after his departure from Shag Rongpo, and was forbidden to travel or meet with friends and family without government authorization.

Send a postcard and/or write an email to protest the destruction of Larang Gar, one of the largest Buddhist centers in the world:

Larang Gar at one point was home to 40,000 monks and nuns, one of the largest religious centers in the world.   Under plans issued by the local government, a series of forced removals and extensive demolition work will be carried out to cut the number of residents down to 5,000 by October 2017. The first round of demolitions and removals, carried out in July, reduced large areas of the site to rubble and caused widespread distress among Tibetans.  If a deadline is missed, punishments will be imposed. These include expelling additional people and even destroying Larung Gar in its entirety.

Residents who have been removed from the site have been made to sign pledges promising not to return to live there. Others have been locked out of their own homes.  Monks and nuns who have been returned to their native regions from Larung Gar have been prevented from joining new monasteries and nunneries. Some have been subjected to humiliating patriotic re-education sessions, in which they are required to sing Chinese propaganda songs and denounce their own Tibetan culture and religion.  The sadness has been felt across Tibet, and inside Larung Gar, three nuns are reported to have taken their own lives in protest against the demolitions.  This damage is not just an assault on Larung Gar and its residents, but also on Tibetans’ fundamental rights, including the rights to freedom of religion, freedom of movement and freedom of expression and association.